*My thoughts going in:*

1. This is known as a “Fitness course” or “roadie course.” I’d never raced nor ridden it before, but I was told to expect wide open trail, lots of fast cornering, and long road stretches. I’m feeling fit-ish, but my strengths are more on the technical end. Keep expectations measured.
2. Start fast, stay fast, act like it’s a cyclocross race. See above.
3. Get low when it’s techy. Pay attention to my body position on the bike to maximize speed. Send it on the jumps.
4. New cornering styles when possible. Big new thing learned at camp was a major adjustment to my body weighting and positioning while cornering. Plan to use it, but also don’t run into trees trying to figure it out.
5. Pedal the descents. I’d hit the Pumptrack Connector Trail in Belmont on Saturday and set my fastest time ever by really staying on the pedals. Carry that thought into the race.
6. Earn your turns. At the top of each climb or rise, ramp the speed back up before allowing myself a bit of recovery.
7. Pack a CO2 just in case. Noticing a bit of a ding in my rear rim when cleaning the bike Saturday, Willem strongly suggested I bring CO2 with me. This proved to be a very useful bit of advice.
8. Don’t give up. No matter what place you’re in, don’t settle in.

It was so fun to line up with such a big women’s elite field, including Meghan making her first appearance in the Elites!!

The weather was beautiful and it was so fun to be lined up at the start, seeing friends I hadn’t seen since the end of cyclocross season and making new friends on the start line. We went off fast, and I led the charge up the hill, with Roz squeaking by for a few seconds in her very fast starting way. I got back around before we hit the trail, then led the whole first lap, stretching my lead over chasers Emma and Lauren in a few sections. I caught a bunch of air on the downhill jumps. My back end felt really sluggish up the climb at the end of the lap, but I told myself it was nothing, just a soul-sucking gravel climb.

Leading on lap 1, with Emma and Lauren chasing.

I came through the feed zone with a bit of a gap. Hit the first turn into the second lap and confirmed I had burped out a considerable amount of air and had a flat. Fumbled through using a CO2 to boost air back in as riders cruised by. I got a bunch of air back in, hopped back on and chased HARD. I was back into 3rd place half a lap later. I missed my second bottle going through the feed zone, very thankful to have made the decision to wear a hydration pack, but worried about not having enough nutrition to sustain my effort. A third of the way in to lap 3, I saw a glimpse of Emma up ahead. The masters guy I was with encouraged me on, I caught her, and then rode with her, following her great line choices for a stretch. I could tell I was really pushing her pace, and eventually I broke away clean into second place, wondering if there was any possible hope of seeing the front of the race again. As I hit the finishing climbs, there was Lauren. I was closing in, but without enough course left to make it happen. Came within 30 seconds at the finish.

It’s hard to be too bummed about a mechanical when you can’t really believe you were able to recover from it and chase back so hard. It was a new experience for me to be leading out the pro race, setting the tempo at the front and working to open and extend my lead whenever possible. Knowing later how close I was to getting back into first, I should’ve passed Emma sooner, as I was definitely settling into her pace a little once I’d caught her. But what I’m most proud of is my mental game. After the flat, I could’ve (and in the past likely would’ve) told myself that 4th place was still good, or that making it back up to 3rd was surely enough of an accomplishment. Instead, I kept pushing, kept chasing as if I were the only one out there doing a time trial. Sure, there’s a bit of bittersweetness knowing I came so close to my first elite win, but I know I learned way more about myself as a racer because of how the race shook out.

Gotta love giant novelty checks, and trying to do a safe Mid-Atlantic Podium Jump with them!

Moreover, I was so, so stoked on how our whole squad did. We had seven racers across deep Open/Pro and Cat 2 19-35 fields, and five of us were on the podium. Shout out to Trek for making elite payouts equal for women and men!

Musings on a long cyclocross season.

Two World Cups in the Midwest. I had to go to one of them. It was just too tempting to pass up, a homecoming and friend reunion of sorts, a great way to use some frequent flyer miles, a gracious offer of host housing, and the chance to both race against and then cheer for the top riders in the world. Sure, it would be brutally hot, my Achilles heel, but I couldn’t resist.

There is a perfect moment seared in my overcooked brain, a second that froze in time, as I looked across the course to see Sanne Cant’s rainbow stripes. “You are in a race with the World Champion right now. This is not a charity event. This is not a joke. This is really it. You’re doing this.” 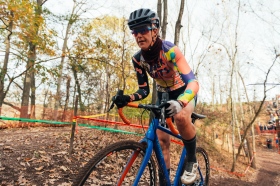 END_OF_DOCUMENT_TOKEN_TO_BE_REPLACED

A couple weekends ago, I (Elisabeth) broke out my pro camera and headed to Trexlertown, Saturday as just a spectator, and Sunday to hop in and race as well as take some photos during the rest of the races. Here’s a little recap, including contributions from Yung TayTay and photos of the Laser Cats in Sunday’s race taken by Willem.

Nittany was the first big race of the region, and the Laser Cats Feline All-Stars were ready to rock. Roz held it down Saturday, crushing for the holeshot on her patriotic single speed. Then our good buddy Rachel Rubino tore through the whole field and took the win! END_OF_DOCUMENT_TOKEN_TO_BE_REPLACED 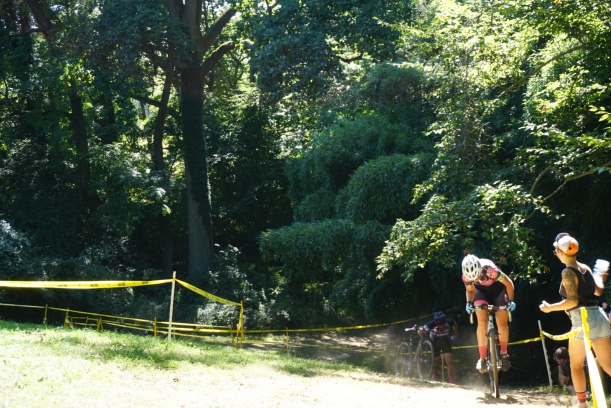 Grinding up the hill to stay ahead of Shauna, hoping for a spray of water from Taylor. Photo: Matty Bee

True story: Cyclocross appealed to me because it was a fall/winter sport. A cold weather sport. A sport where there might be snow. I am a snow baby. I was born in the frigid cold of Nebraska in January. A year ago, I said I refused to race ‘cross in months that didn’t end in “ber” (which when you say it out loud is funny because it sounds like “brr”). I should probably revise that to “no ‘cross before Labor Day.” Sunday was hot, dry, and very dusty. But with a course as fun as Granogue, I’m nothing but happy to be back in the cyclocross game for another season. END_OF_DOCUMENT_TOKEN_TO_BE_REPLACED 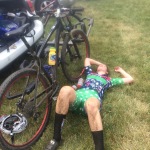 That’s the refrain for my first foray into the world of Cat 1 XC mountain bike racing. It means a lot of different things, though. Let me explain. END_OF_DOCUMENT_TOKEN_TO_BE_REPLACED

After relocating from the epicenter of endurance backroad racing (Lincoln, Nebraska, home of Gravel Worlds) to the much more urban Mid-Atlantic last fall, I was excited about all sorts of new racing and riding opportunities and meeting all sorts of amazing women to ride with (hello, Team Laser Cats, Women Bike PHL Devo Squad, ladies of Arrow Racing, and so many others). However, I knew I’d miss getting up at the crack of dawn (or well before) to spend all day on the bike, pushing that odometer over the 100-mile mark. END_OF_DOCUMENT_TOKEN_TO_BE_REPLACED