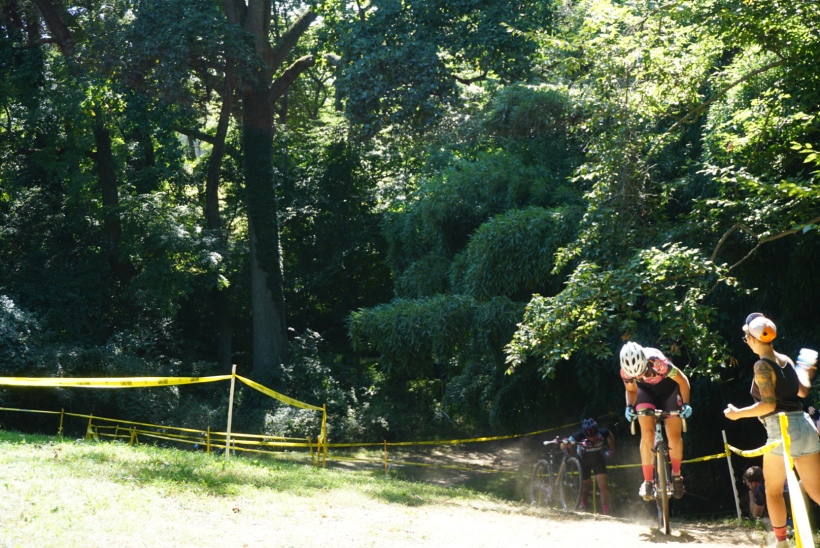 Grinding up the hill to stay ahead of Shauna, hoping for a spray of water from Taylor. Photo: Matty Bee

True story: Cyclocross appealed to me because it was a fall/winter sport. A cold weather sport. A sport where there might be snow. I am a snow baby. I was born in the frigid cold of Nebraska in January. A year ago, I said I refused to race ‘cross in months that didn’t end in “ber” (which when you say it out loud is funny because it sounds like “brr”). I should probably revise that to “no ‘cross before Labor Day.” Sunday was hot, dry, and very dusty. But with a course as fun as Granogue, I’m nothing but happy to be back in the cyclocross game for another season.

Though I wasn’t racing until 2:30 in the afternoon, Willem and I headed over to the DuPont estate in the morning to catch my teammates Michaela, Roz, Sam, and Taylor lining up in the 3/4 race. I screamed like a crazy cyclocross mom as the four of them picked their way up through the massive 50-woman field, with Taylor charging to a commanding lead and the win in her first ever cyclocross race. It was so awesome to see them race and get better lap after lap. Teammate stoke factor was very high. 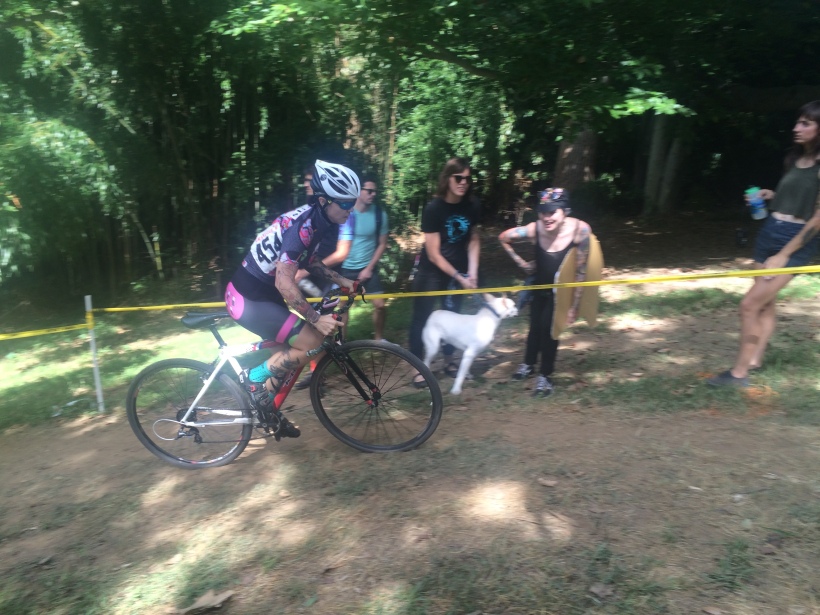 Sam fights a bruised ribcage to a top-10 finish with encouragement from Morgan, Emily, and Krista

Michaela kept moving up, making good passes and getting better every lap. By the end of the race, she was riding this on her way to 15th! 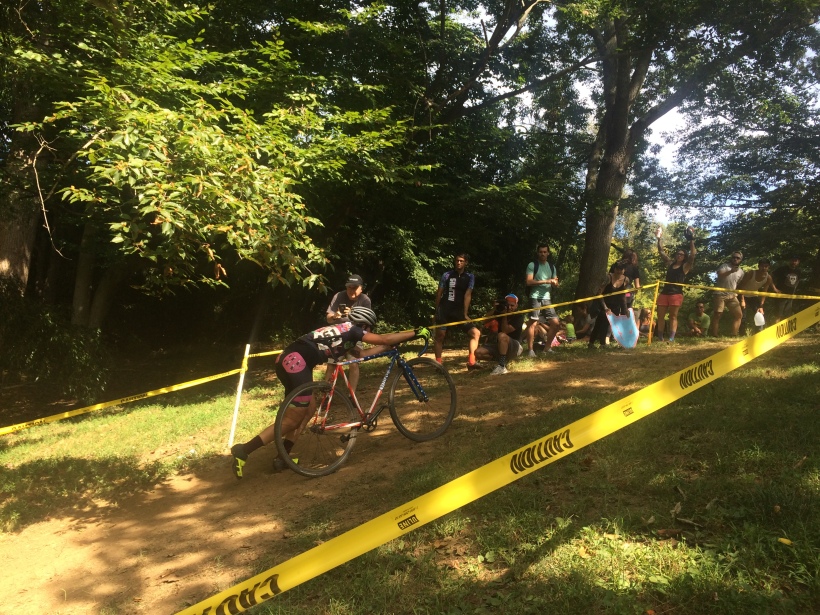 Roz is a singlespeed girl in an eleven-speed world! Her bike handling skills kept her in the top 20 on this very hilly course. 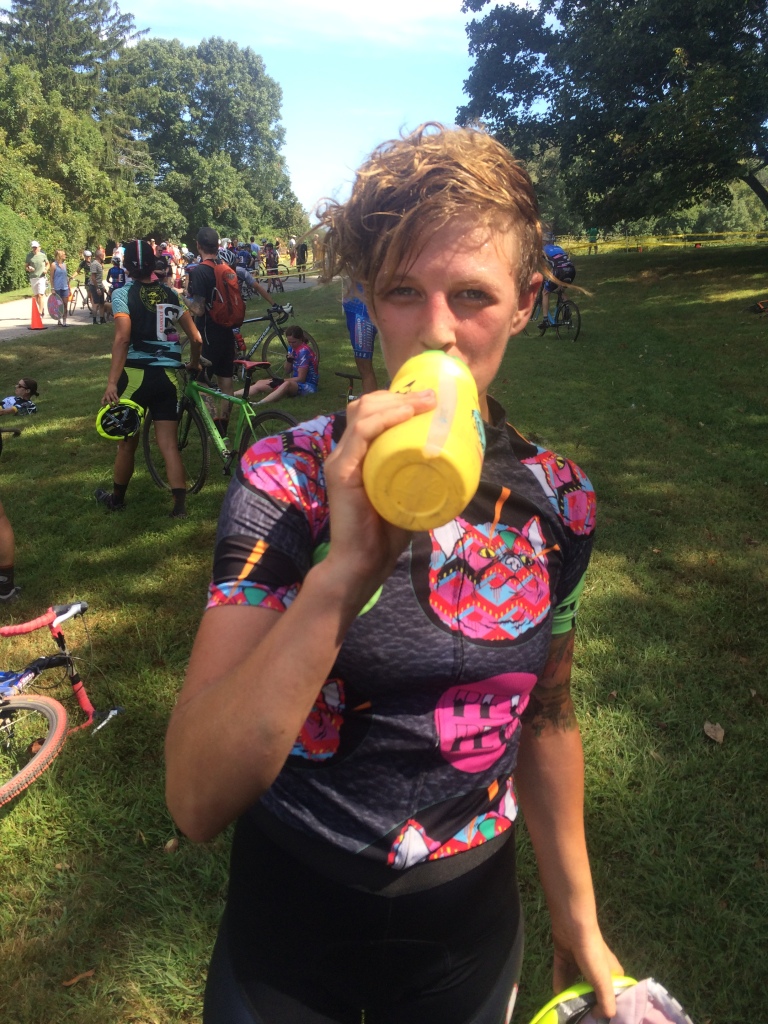 Being there early meant I took several pre-ride laps of the course. I didn’t want to kit up early, though, so I pre-rode in style, staying cool in my dress. Only the barriers were a little awkward.

By the time the 1/2/3 race rolled around, any bit of cool air had been replaced by straight up heat and pounding sun. I kept drinking water, and was glad I’d left on one of my bottle cages to carry water with me during the race. There wasn’t much formality to the start line, with no callups and no countdown. I didn’t have a great starting position, and then I proceeded to get boxed in on the starting straight. I contemplated going around through the grass but worried the risk of getting pushed out of the tape would be too great, so I stuck with my lousy last-to-the-dirt place and vowed to move up in the first section if I could. We had a bit of a dirt and rocky climb before dropping down the face of the hill, and everything here was so dusty that it was impossible to see the rocks. I moved up a couple places, then got caught in some traffic on the second steep climb. I was parched before the first lap was even a fourth of the way done.

Lots of practice on refining cornering at speed is starting to pay off. Photo: Sam Orskog

By the middle of the first lap, I was matching turn for turn with a rad lady named Shauna from D.C. whom I’d been chatting up during pre-ride. She was crushing on her singlespeed (and making me miss mine, kind of), and we had vowed at the start to keep the #partyintheback alive and well. I got ahead of her on a climb, but she matched me on every section of the course, pushing me so hard to stay ahead of her even when every fiber of my body was telling me to go find the nearest walk-in freezer or swimming hole. Each climb, I could hear when she’d have to run because she’d yell at me to keep pushing. I kept telling her to keep fighting. And so there we were, pushing each other for the next 4 laps as we gunned for 11th place. We weren’t gaining any ground on those ahead of us, but we weren’t losing any, either. And all along the course, I looked forward to the places I knew that my and her teammates would be cheering. I was throwing my bike into the corners, carrying more speed through them than I’ve ever felt comfortable and floating over rough sections of the course on my trusty War Axe.

Dropping down the washboard of dust. Photo: Matty Bee

In the final lap, I put in a dig on the last climb and got a gap on her by the time I hit the last few bits of the course. I came across the finish line red as a tomato and so parched I drank an entire bottle in one gulp. Shauna came across not long after, and we hugged and gushed in our exhaustion about what a good race we’d had. As a bonus, I heard my dear friend Rachel had crushed her way to the third step of the podium! So rad. After drinking all the water in sight, I watched the men’s elite race, cheering on Willem’s bunnyhopping and watching my good buddy and new East Coast resident Craig Ethridge break hearts and crush souls as he charged on to win it on his singlespeed, always chatty and positive while racing.

A year ago, I had just moved to Philly two days before the Granogue race. I showed up on my very over-geared singlespeed and didn’t really know much of anybody. It was lonely, very hard, and I ended up flatting out of the race with no pit wheels. What a difference a year makes! This time, I felt so proud to be part of a tight-knit team of women taking the Philly scene by storm, with three teammates who came out to cheer and support on top of the other four that raced. Now, if someone could just turn down the heat… 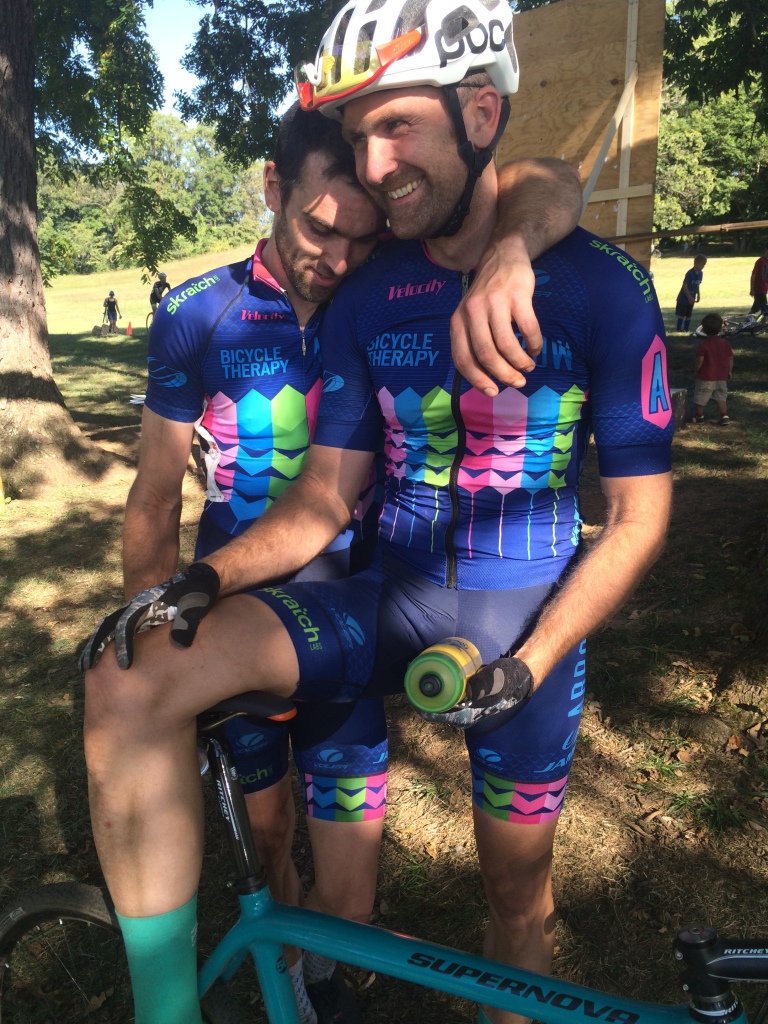 Speaking of heat, check out these two gents from the Arrow Racing squad.

One thought on “Hot Cross Granogue”