I’ve been racing a cross race every weekend since Granogue (which was the first weekend in September), so since I wasn’t registered for any race on this particular weekend, I was going to take a nice chill Sunday off to not race. Roz then told me she was doing Stoudt’s, her second race since the broken collarbone, and our neighbor Louis was going to race too—his second CX race ever. Well, looks like I am going to race after all.

The three of us, plus the dog named Giro, were up and out the door so early to make it in time for Louis’s race, which was the first of the day. We roll up to the brewery and you can see a lot of the course right away, because it takes place on a super steep hill, rad. Roll up to registration and get myself a day-of for the Women’s 3/4 race, jump on my bike and do a quick pre-ride the course, the hills are as brutal as they looked from the car, with a couple tough woodsy sections and one big log, very fun, very technical course. We watch Louis’ race (Men’s C). Afterwards, I asked him how bad the course was on Roz’s singlespeed, to which he replied: very. So, naturally I decided I wanted to try it as well. After a quick chat with our buddies on the SRAM team who also race single speed, I landed on “why not!” and found myself also registering for the Open Single Speed race. Because what’s better to do on your supposed-to-be-day-off from racing than waking up stupid early and racing twice in one day, on super hilly technical course! 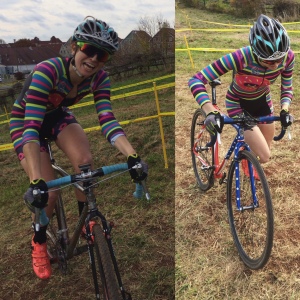 Goat Hill did not get any easier as the races progressed.

The women’s 3/4 lines up, and being a day-of registration, I should be in the back, but there is an opening in the front row that no one else is moving up to, so I wiggle my way up. The whistle blows and since I am a roadie and it’s on pavement, I grab the holeshot. I then promptly lose my first place position by taking the very first turn too wide and taking out the tape, also because I am a roadie. The race’s heckling was excellent, with our brothers of Rohan Cycling really getting me up the biggest climb, as they ran alongside and pointed out that they were running faster than I was riding. You simply need to just bury yourself and hammer when you get a heckle like that. I ended with my first cross top-ten in 8th, with my teammate Taryn on the podium in 2nd, and Roz in 10th. Taylor did the Elite race and also got on the podium in 5th, so all in all, very strong day to be a Laser Cat.

Laser Cat Babes doing what we do second best, being fabulous. What we do best is riding bikes.

Man, glad that’s over, my legs are smoked. Oh, right. I’m doing the singlespeed race too. Time to grab lunch and a beer, socialize, and freak out a little.

As we are lining up for the single speed race, I get to meet the other ladies doing it, Kelli of Guy’s Racing and Nicole of Veloville USA. At least I won’t be the only lady amongst all these super fast dudes, should be fun! I get off to a decent start, not having the gearing for the holeshot, but getting to turn one in the top five. I start losing a couple places on the hills, as expected, but I’m not in last place! Then I hit the woodsy section and PSSSSSSSSSSH. Damn, a flat, and nowhere near the pit. So I shoulder Roz’s bike and start hoofing it, a short while later Louis and our friend Rob pop out of the trees looking for me, so I holler to them to grab the front wheel off my bike and meet me at the pit. A few minutes and some sad legs later, I finally make it to the world’s drunkest pit mechanics (naturally, since the race was at a brewery and it was the last race of the day), Louis and Rob swap my wheel out for me and I’m back on the bike, in dead fucking last. Roz gives me a shout “DEATH BEFORE DNF,” and she’s right, I am going to finish this race! In the next two laps, I pass a few masters that we were racing along side with and finally cross the finish. Afterwards, Kelli, Nicole, and myself got together and convinced the race organizers that we needed a women’s single speed podium, so even though I was DFL, I was still 3rd on the podium, and I even won a free beer and t-shirt!

My legs were so incredibly sore the next day. 10/10 would double up again. In fact, I did, the next weekend Sly Fox, and will be doing it a third time at Kutztown this weekend, I might be addicted.