I cashed in big time on the host housing thing, back when I did a little charity ride called Bike and Build: a group of people who ride across America (coast to coast) to raise awareness for and build affordable housing across America. I slept in church basements, school gyms, JCC’s, occasional dorm or hotel, in host housing, and throughout the process was amazed over and over at the generosity of strangers who take in strangers, just because that’s the right thing to do, and they are in a good circumstance to be able to do so.

Ever since then, I’ve been looking to keep the good karma flowing, and it’s also just fun to have old friends and new friends over for cycling and other events (erm, med school interviews and mathematics conferences for example). And thus, when Elisabeth sent out an email asking if anyone would be interested in hosting some people, I responded in a heartbeat: of course!

And thus began our weekend of geeking out like the enthused fangirls that we are. Pepper Palace Ladies were super fun to have around, and they even let us tag along for their course preview ride.

You realize that they are just as excited to see each other as well, and friends love to say hello (Hi Team Twenty 16!)

The best party ever happens on Lemon Hill every year, and it’s where all of your cycling friends will be, and for once it’s not just because you’re racing, but watching the super fast people show you how it’s done! 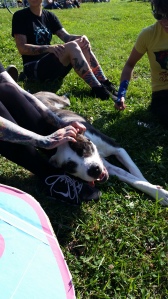 In the Feed Zone

Pepper Palace Pro Cycling Team also needed some help with feeding during the race, and as I’m never one to say no to being part of the action, I donned Christina “Gokes” Gokey-Smith’s red hot vest, and got a quick tutorial on best practices before plunging right in. (There’s a technique to it – if you ever feed, get advice first, because I definitely got it wrong the first time!)

I hung out with former PB&Co p/b Human Zoom teammie Sarah who was feeding for Team Twenty 16. We had a big fist fight to try to sabotage each other’s water bottle supply, obviously. 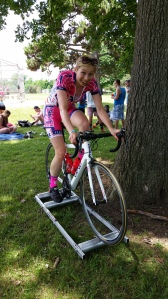 Everyone also marveled at the dedication of the Fearless Femmes lady racer who was getting in her intervals workouts on rollers between feeds. I look over, and it’s none other than Amy Cutler! She’s healing up great after her injury, and she’s cleared to ride bikes soon – yay!

And then the women’s race began!

There’s a lot of down time between feeds, so Michelle (Arrow Racing) hooked us up to the inaugural live feed of the women’s race narrated by beloved Laura Van Gilder. Thanks Vox Women for getting this up and running! 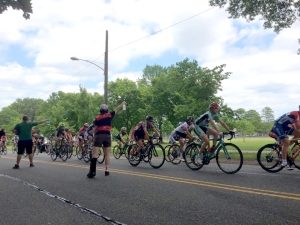 And then there’s the intensity of the actual feed itself – so glad there were the three of us (Rob of QCW, Michelle, and me) spaced out for redundancy and 3rd chances.

To all potential bike racer hosts: your guests will likely be cool people to meet, and sometimes there’s fun swag involved. Thanks Christina Gokey-Smith!

On chatting about team drama and its ubiquitous nature with Christina, some words of wisdom she dropped for me were: the most important thing is to find a group of people you like being in a team with, because that’s what it’s really about. I’m lucky to have found a great team! Yay Laser Cats!