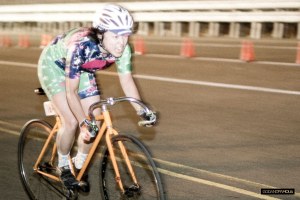 Like the stuff of legends, Red Hook Crit polarizes opinions instantaneously. You either think it’s the most idiotic ridiculous fake race ever, or you actually know what it’s about: an event that requires courage, confidence, and extraordinary skill. Yes, it’s on brakeless track bikes on a crit course. Yes, that is unusual. Yes, I don’t recommend it for an average joe who happens to ride bikes occasionally. However, the next person who tells me that it’s a “glorified alley-cat with a bunch of untrained amateurs,” or that it is a race that is “adding risk, for the shear sake of having the risk” – if you’re brave enough to say it to my face, you will encounter a dark, dark side of me that you’d best leave alone. Yes, it is dangerous, but so is every other bike race. I have felt safer in the Red Hook Crit women’s fields than some as a result of the high caliber of women racers who participate.

OK, rant aside now: you guys, this weekend was just really fucking awesome.

Admittedly, I had my heart rate spiking for about a month before the race, because despite having raced it before, I was terrified. There’s racing crits, there’s racing track races, and then there’s racing Red Hook Crit with its crazy hairpin. The hairpin. THE HAIRPIN. I fixated on the hairpin constantly, fretting about losing control, skidding out, pedaling striking, etc. I’m not ashamed to admit that racing scares me. Because part of racing is facing your fears and saying, I CAN DO THIS. And going out and fucking doing it. 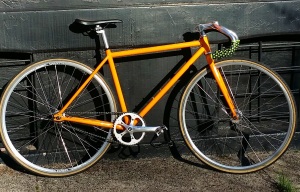 Help from Philly Bike Smith with Eventual work by Bicycle Revolutions. Thanks guys!

First things first, I needed to get my bike together. Last year I borrowed Tatito Rod’s super lite actual track bike, but we realized the logistics of that made for an incredibly stressful time between races. I didn’t really feel like committing to a real track bike, but I had this commuter bike that could sorta work with track bars. Being a type of designer in my 9-5 means that aesthetics matter quite a bit, so through some help from Philly Bike Smith, I found some silver track bars all the way at Bicycle Revolutions that matched my bike perfectly. And star patterned bar grips. Because, Stars. 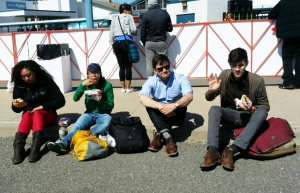 The best thing about bike racing, is that it’s kind of like weddings: it brings my favorite people together! I not only got to see my Tati diaspora from Chicago, NYC, and Washington D.C., but they showed up with a full bike mechanic’s tool set. 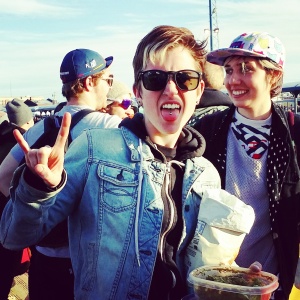 Proper technique TO #ROCKOUTWITHYOURGUACOUT by Michaela

Also, my two awesome teamies Michaela and Melissa took a bus up to witness the spectacle for the day, and Michaela showed up with guac. If you ever want to make a bike racer love you, please present her with a tupperware filled with fresh-made guac after her race. 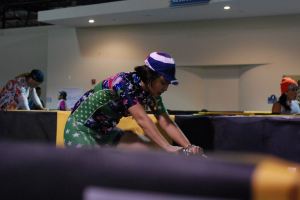 I usually pride myself on being pretty low-maintenance, but you guys: Red Hook Crit treats their racers RIGHT. It’s not just the swag (Castelli base layer for picking up numbers early, official cap, t-shirt with race reg), it was also the amazing warm-up corral stations they set up – and they even set out bottled water by the stations! This is in addition to all of my friends holding my things, offering me food, offering bike maintenance, and just generally being incredibly supportive. It was really just amazing.

The thing about the 9-5 is that it isn’t really a 9-5. It also isn’t singular, as I work both a full-time and a part-time job right now, meaning: not much time for training … Realistically, my fitness was not anywhere near the women who finished the race. It’s a reality that I knew I’d face one way or another, and perhaps I could have let it get me down, or quit the race entirely, but that’s not my style. I would do the best I could, I’d hang out with great friends, watch some amazing racing, and have a grand time.

My anxiety peaked right before the qualifier: how would it go? An enormous crash in the hairpin? Also, my bike was incredibly heavy, possibly the heaviest in the field (I wish there was a contest – I so would have won). Fortunately, Rod rocks, and he let me borrow his extra set of wheels. First a clincher, and then a tubular even for the final. Thanks Rod!

This may sound crazy, but in reality, it’s a good thing I was freaking out, because I actually race better if I’m in a TURMOILED FRENZY, rather than calm. As Tatito Rory told me upon greeting me: “Nice to see you! Now go stress out!” Yessir, I will do just that. 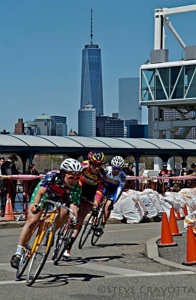 And then sometimes things don’t go the way you expect at all, as in, your contact lens falls into your shades during the qualifier for the race you’ve been stressing out about for a month. Quick decision led me to 1) take off my glove, delicately pick up my lens, and stick it in my mouth for safe-keeping, 2) leaving the qualifier after only 3 laps, hoping that the 2 fast-ish (but not max-paced laps) were fast enough to stage me in an OK place, 3) replaced said-lens in eye with some eye-drops … because I didn’t bring extras. Moral of the story: bring extra contact lenses and / or your normal glasses to the race course, because some days, your contact lenses decide to fly out. ANYTHING CAN, AND WILL HAPPEN. 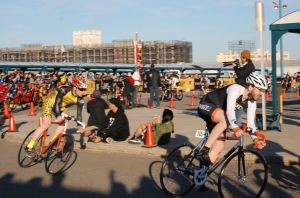 I was staying with Tatito Rod who had driven 12 hours to Brooklyn with Chicago Cuttin Crew racer Al Pearson. The Last Chance race is for the 10 places after the 85 qualified racers. It isn’t run as as time trial, but as an actual race. Rod sadly got edged out of the Last Chance race, but Al Pearson was 2 spots away from qualifying and raced for ONE LAST CHANCE. He has a great race face (as in, stoney), and he looked great for the entire race, but then he missed out by 2 spots again! Next year, Al.

To be honest, I did it all wrong in terms of the race except for one thing. I ate too much too close to the race. I couldn’t clip in fast enough, and fear kept me from chasing women into the first hairpin. I lost the main pack almost instantaneously, and found myself chasing the chase group. And then I found myself bridging to the chase group. Each lap, I hear 3 voices: Tatito Sheena, Laser Cat Michaela, and some random lady cheering on Team Laser Cats by the chicane! Whoever you are: YOU ROCK.

Although the hairpin was what really freaked me out, turns 9 and 10 were no joke either. I found myself leaning harder and turning more aggressively than I ever thought possible (PEDAL STRIKE??? NO??? REALLY???) I find myself sprinting past the chase group, and I wonder if there’s hope of bridging to the next group. Then … I got lapped and pulled, sadly. The thing I did right was: I didn’t give up. And as a reward, God and Famous got that amazing photo that is featured in their Red Hook Crit photoset. The photo says: I gave it my all. And that’s the best I can ask for. 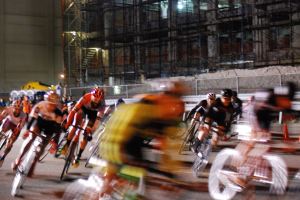 Was just inspiring on so many levels. We watched them pass through the hairpin, and it was just amazing to see how fast they were able to take it. I saw skid stopping and speed scrubbing in action – things bike messengers and urban fixie riders just know how to do like second nature with ease and aplomb. I was cheering on François Fevrier, a French fixie racer who had earlier asked to borrow my rollers. Obviously, I got to cheer in French – which made it that much better. He finished with the main pack! ALLEZ ALLEZ, FRANÇOIS! 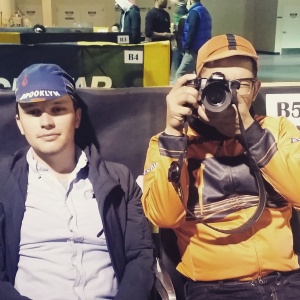 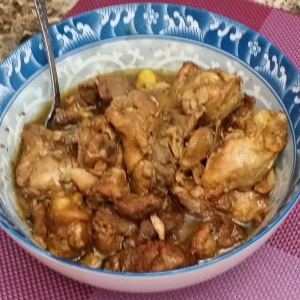 Rod’s aunt fed us delicious adobo before we left. It was heavenly.

Of course, being a racer, if I’m to be completely honest, I’m not pleased with my results. I should have been more aggressive that first lap, I tell myself. I should have trained harder (with all that free time I have). I need to practice hairpins and learn all the fixie messenger stopping techniques. Blah, blah blah: the negative spiral can go down forever.

Or, I can remember the excitement of seeing my friends. I can remember hearing Sheena’s voice above all else telling me “GO SOPHIA! CATCH EM! YOU’RE SO CLOSE!” (Sorry Louis and Ian: I really couldn’t hear you guys.) I can remember Michaela’s awesome guac. I can bask in the incredible hospitality of Roderick’s family who took in a rag tag band of bike racers for the weekend, on top of feeding us delicious foods.

I can feel so much respect for the amazing women I had the opportunity to race against. I can be humbled by the support and generosity of friends and be happy that I had the chance to take part in such an amazing experience. I’ll choose this latter option and remember: there’s always next year!

All photos are either credited or they are my own. The “featured image” (the post as seen from the blog main page) is taken by Roderick De Jesus https://www.flickr.com/photos/theroderick/

Erica and Elisabeth had a very nice time effin around courtesy of @hushmoneybikes on Friday. Vistas enjoyed, bicycles hiked with, secret trails shredded, and summer swimming hole adventures plotted. And all in the name of fundraising for the @chacofund! #FallFuckaround #FindOut
She finishes in 3:45 and says she could’ve run it Eve’n faster! Wowwweee, do you Eve’n run bro? Eve’n smiling as she picked up her pace in the last few miles! We are so proud of you, Eve!! #marathon #PhillyMarathon
Bundle up and get your cheer on, it’s @philly_marathon weekend and Eve is ready to run! Go, @eviltothemaxson go! Friend of the squad and running? Drop a line in the comments so our roving cheer squad knows to look for you, too. 🏃🏻‍♀️🎉
Negotiating who has more use of the @septaphilly @septa_social ride card handup, as captured on film by Kate, seen holding an array of cameras and racer jackets. #35mm #SlyFoxCX #cyclocross #HandupsAreNotACrime #CreativeHandupsRule 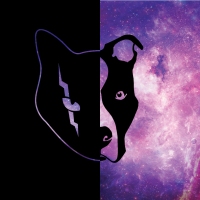